Oil held steady this week while light trading pushed prices slightly higher on Tuesday morning, adding to the likelihood that oil prices will hold their recent gains heading into the New Year. 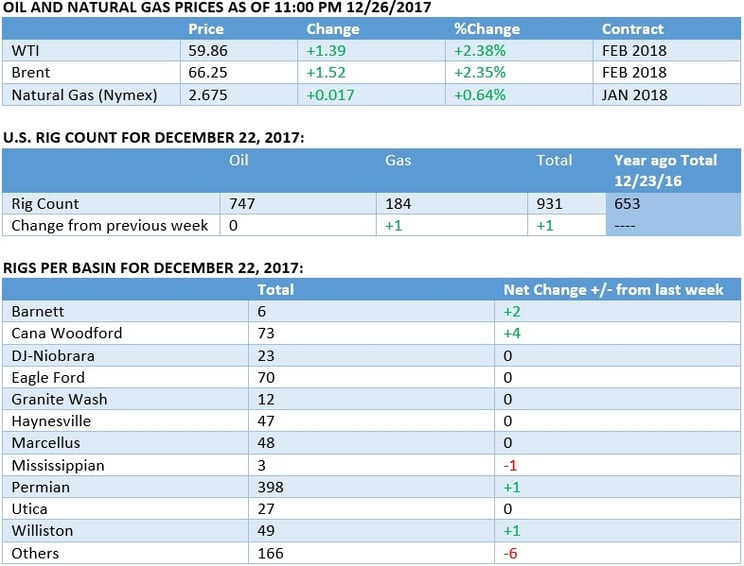 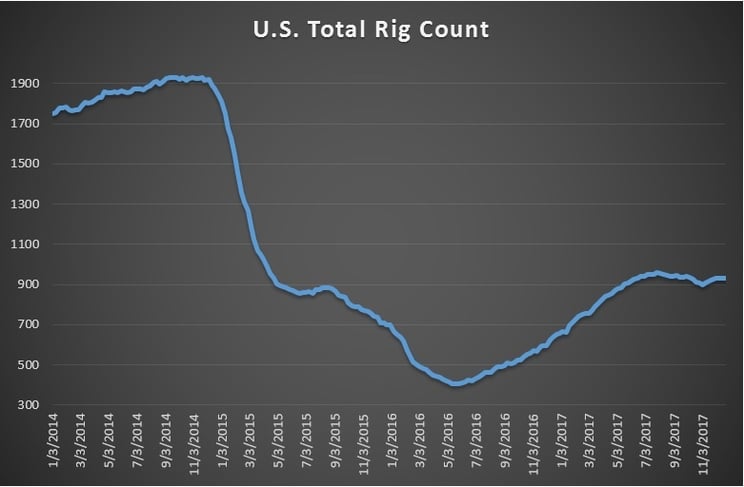 Chart of the week

- Pioneer Natural Resources (NYSE:PXD)  issued a sustainability report that details plans on how the company would adapt to a carbon constrained business environment. Pioneer believes that its low breakeven price (~$24 per barrel) will give it a leg up on its competitors if carbon is taxed or restricted.
- W&T Offshore (NYSE: WTI) saw its share price surge more than 9 percent last Thursday following news that its exploratory offshore wells in the Gulf of Mexico were successful.
- Transocean (NYSE: RIG) saw its share price gain more than 5 percent after winning a contract from Statoil (NYSE: STO) to supply a rig for a 22-well drilling program in the North Sea.

Oil was steady, but elevated in light holiday trading this week. Brent and WTI hovered near multiyear highs.

Russia supports gradual, managed exit from OPEC cuts. In another bit of news that bolsters the OPEC deal, Russian energy minister Alexander Novak said that Russia supports a gradual exit from the production cuts, reducing the risk of a messy conclusion and return to full production.

Iraq oil minister sees market balanced in first quarter. Iraq’s oil minister Jabar al-Luaibi said that he was optimistic that the oil market would reach a balance in the first quarter of 2018, which will be accompanied by higher oil prices. His comments are some of the most bullish out there among OPEC members, most of which see such an event unfolding in the second half of the year.

Energy strategists predict lower prices ahead. While Iraq’s oil minister voiced optimism, a group of energy analysts told CNBC that there is more risk to oil on the downside as we head into the New Year because of rising U.S. production at a time when speculative moves in the futures market have become a little too bullish. "While we could easily see an escalation of tensions in the Middle East, in the absence of that, optimism is probably misplaced for up to six months,” Harry Colvin, director and senior economist at Longview Economics, told CNBC. “Everybody seems to be facing the same way over oil at the minute and it's when this happens that you need to be especially careful.”

Shell buys UK utility. Royal Dutch Shell (NYSE: RDS.A)  purchased First Utility, a UK-based utility, for an undisclosed sum. The move comes a few months after Shell bought two electric vehicle infrastructure companies as it seeks to diversify its portfolio beyond just oil and gas. First Utility’s cofounder sees the acquisition by Shell as a way to bring more competition to the electric power sector in the UK, and also accelerate the adoption of EVs and digitalization in the utility industry.

Canadian mining company wants court order to seize control of Citgo. Canadian mining company Crystallex International won a 2016 arbitration award of $1.2 billion against Venezuela, but has not been paid. In November, the company was on the verge of a deal with Venezuela, but it has since fallen apart over lack of payment. As such, Crystallex now wants a court to award it assets from Citgo, a subsidiary of Venezuelan state-owned company PDVSA. The case is a major risk for Venezuela, which could become more exposed to asset seizures as it fails to pay creditors.Related: Is Saudi Arabia’s Post-Oil Future Realistic?

TransCanada denied request to amend Keystone XL application. TransCanada (NYSE: TRP) was dealt another blow in its effort to build the Keystone XL pipeline when Nebraska regulators denied the company’s request to retrospectively amend its application for the pipeline. In November, regulators approved the pipeline, but crucially, for a different route than the one that TransCanada wanted. That opens it up to fresh legal challenges, something TransCanada wanted to avoid. The next steps are unclear.

Senate energy leader wants legislation in early 2018. The top Republican on energy issues in the Senate, Lisa Murkowski (R-AK) is pushing Senate leadership to take up energy legislation early next year, a bill that mirrors legislation that almost became law in 2016, according to E&E News. The bipartisan bill would speed up the permitting of LNG exports, address cyber security at energy infrastructure, fund conservation and energy efficiency, among other priorities.

Kinder Morgan to move forward with $1.7 billion natural gas pipeline. After signing Apache Corp. (NYSE: APA) as a customer, Kinder Morgan (NYSE: KMI) said it plans to move forward with a major natural gas pipeline that will run from West Texas to Corpus Christi. The project will take advantage of the drilling boom in the Permian basin, where natural gas production is rising sharply in conjunction with the surge in oil output. The pipeline could supply refiners and processors along the Gulf Coast with gas, while LNG export terminals could ship gas abroad. The pipeline is expected to be operational by October 2019.

U.S. regulators propose rollback of offshore drilling rules. The WSJ reported that the Trump administration is seeking to cut offshore drilling regulations that were put in place after the deepwater horizon disaster in 2010. The proposed changes are long, but one example includes the scrapping of a requirement that third-party inspectors be certified by BSEE, the government offshore watchdog. The proposal, BSEE says, would save the industry $900 million over a decade.

Oil companies line up for Mexican auction. 29 oil companies have signed up to pre-qualify for a deepwater offshore auction in Mexico set to take place in January, according to the WSJ. Mexican regulators said that 16 of them signed up to be operators. The list suggests there is strong interest in what will be the country’s second deepwater auction. A year ago, the first auction was deemed a success, and went a long way to sparking interest in new investment in Mexico.Related: WTI In 2018

Euronav NV to buy rival Gener8, consolidating oil tanker industry. Euronav NV (EBR: EURN) said that it would purchase Gener8 Maritime Inc. (NYSE: GNRT) in a deal worth $500 million, according to the WSJ. The acquisition will make Euronav one of the largest oil tanker firms in the world. The tanker industry has suffered from overcapacity, and the supply of oil tankers is expected to grow by 5 percent this year, faster than demand. More consolidation is likely, experts say. “Fewer players will be controlling seaborne oil transport, which will make life more difficult for smaller owners,” Basil Karatzas, a New York-based maritime consultant, told the WSJ. ”If you are ExxonMobil, you’ll look for big operators like Euronav to move your oil, and this could spur more mergers as asset values are still low.”

By Tom Kool of Oilprice.com