A sustained rise in the 10-year Treasury yield matters a great deal for US equities and in particular for technology, very much the leading sector of Wall Street’s ageing bull run.

Whether you look at the Nasdaq-100 index or a smaller collection of high-flyers such as the NYSE Fang+, they have not relished the recent jump in long-term bond yields. There was finally some relief on Tuesday — after three days of losses for Wall Street — as the 10-year yield retreated from a high of 3.26 per cent, helping the Nasdaq and NYSE Fang+ index bounce a touch.

Tech comfortably remains the best performing sector of the S&P 500 this year but we are in new territory for bond yields and that alters the valuation dynamic for investors. Low bond yields boost the future value of cash flows and that long-term discount factor has played a major role in propelling the tech sector on its Icarus flight path during the bull run and era of easy money from global central banks. With the 10-year Treasury finally holding well above 3 per cent for the first time since 2011, all eyes are on whether the valuation support for tech stocks takes a bigger hit.

As analysts at Morgan Stanley note: “Given their lack of dividends and high valuations, high-flying growth stocks are arguably the longest-duration assets in the world. Therefore, it’s perfectly reasonable that they would eventually succumb to rising rates.”

The bank adds: “Growth stocks remain immune until rates cross a certain threshold. Was that level breached last week? We think the answer is yes, because growth stocks now are less attractive while many discarded value stocks, like financials, become more appealing.”

Earlier this year, the Nasdaq-100 dropped 10 per cent on two separate occasions, first over January into February and then from mid-March into early April. Ultimately big tech overcame a 10-year yield flirting with 3 per cent and the Nasdaq-100 peaked in late August, with a then year-to-date gain of 20 per cent. 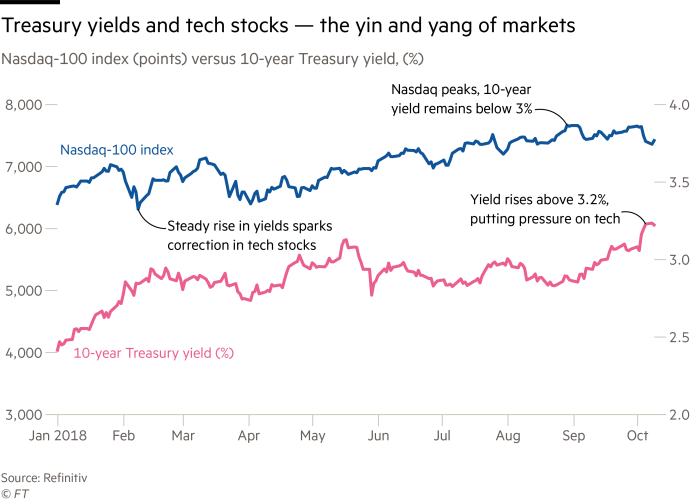 The big question now is whether a sustained rise beyond 3.25 per cent in the 10-year Treasury yield spurs a bigger pullback in tech. Given its one-quarter weighting in the S&P 500, that outcome will resonate loudly. Also at play here is the importance of why yields are rising. Higher yields reflecting a stronger economy suggests that elevated values for the equity market’s growth favourites become relatively less appealing. In turn the more economically-sensitive sectors should prosper. Tech has dominated the current US bull market as overall economic growth was modest until tax reform arrived with a bang at the start of this year. So plenty rests on whether the US economy has sufficient momentum to power into 2019, or are we simply seeing a cycle peak in economic activity (moreover one that has spurred a false breakout in bond yields?) There’s a very lively debate on that score playing out at the moment and will keep markets on their toes for a while.

Chris Watling at Longview Economics reckons the rise in bond yields is setting up equities for a major pullback and that “tech will be at the heart of it” and he also points out that the sector represents “a crowded trade and one that’s getting cleaned out to some degree”.

But should market turbulence escalate, tech can rebound, particularly if a sharp drop in equities ultimately prompts a switch into Treasury debt that stems the upward pressure on yields.

I would add that we have the reporting season for third-quarter earnings heading our way with major banks kicking things off on Friday. Until big tech profoundly disappoints on the earnings front and/or the Sino-US trade war really knocks the sector, I suspect there is room for a rebound as we have seen so many times before.

I’ll leave Chris to sum up:

“The leadership of the market in recent years has been tech and even as we are nearing the end of the cycle, that will continue to persist.”

Renminbi, oil and bond yields — The big three that top the checklist for investors as we roll through October. A weaker Chinese currency, new highs for oil and a further rise in bond yields all pose challenges for global markets and risk appetite.

That volatile spread — Italian 10-year government bond yields rallied back sharply below 3.45 per cent on Tuesday after an earlier foray to 3.72 per cent. The spike in yields briefly pushed the spread over the 10-year German Bund out to 3.1 percentage points, its widest level since April 2013. Here’s a look at Italian bonds stress via FT markets. For all the pressure on Italy, we have not yet reached a critical level given the lack of contagion we see among the eurozone periphery. Spain’s 10-year bond yield of 1.60 per cent has risen in line with German and French benchmarks over the past month. That leaves Italy’s 10-year some 2 percentage points above Spain’s benchmark, the widest spread in more than two decades and out from 25 basis points a year ago. What happens in Italy is staying there for now.

The yen takes a modest breather — Less than a week ago the Japanese currency was nearing Y115 to the dollar, a level previously visited in November last year. The yen has subsequently appreciated towards Y113. What may help it appreciate further is whether the 30-year Japanese bond yield rises beyond 1 per cent. That level should attract Japan’s life insurers to buy domestic 30-year bonds and bring some of their offshore money home.

A test of sentiment for Treasury debt — A double header in note sales on Wednesday as the US Treasury sells three-year notes in the morning and then follows with a 10-year sale at the regular time of 1pm. Investor demand will be closely watched.