With the football world cup in full swing and already producing a fair number of shock results, investors are left wondering whether the second half of 2018 can deliver a dazzling performance.

Returns in general have been poor since the optimism of January propelled a number of equity markets to peaks that many have subsequently not revisited.

Currently, many global equity markets and total returns for credit loiter in the red zone for 2018. Cracks in emerging markets are widening and even on Wall Street, once you strip out tech and small-cap shares, the picture looks far less optimal.

This week global share markets swooned as the prospect of a Sino-American trade war intensified. Even when Mr Trump retreated from plans to restrict Chinese investment in the US on Wednesday, the market relief was fleeting.

Clearly, the noise and presidential tweets around trade are not going to fade anytime soon. Until this week, the market view was that tough trade talk from the Trump administration was a necessary prelude to some kind of negotiated deal. That may well be the ultimate outcome, as Mr Trump seems to view his success through the lens of a higher stock market. 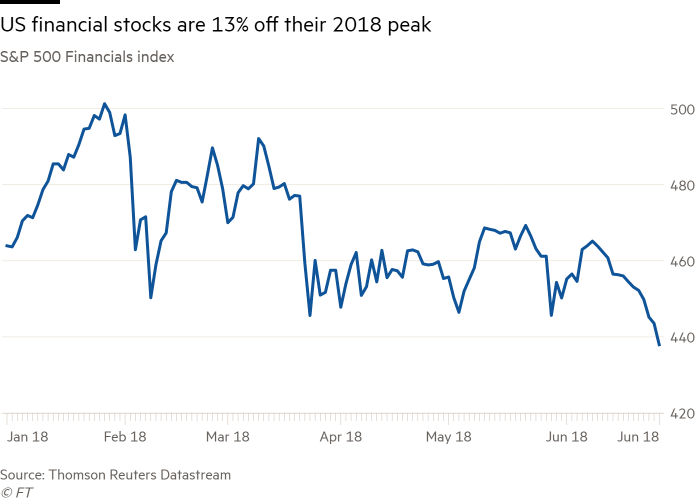 Across the pacific, no matter the unnerving sight of the renminbi falling to a six-month low against the dollar, many in the currency market reckon the risk of Chinese capital flight gaining momentum outweighs any realistic chance of Beijing condoning a weaker renminbi as a trade weapon against the US.

While the tail risk associated with a trade war has become a little fatter this week, a bigger issue for markets and one that will largely determine the performance of portfolios in the coming months is the path of Federal Reserve policy and further strength in the US dollar.

While the onset of global quantitative tightening was widely expected when 2018 dawned, investors drew comfort from a synchronised global economic upswing. Faith in the reflation trade, including the US — where real yields are higher this year but still remain in a long standing range — however has been broken.

As Chris Watling at Longview Economics observes, ‘’trade is definitely a negative, but China and Europe are slowing. While the US looks better, a stronger dollar feeds emerging market weakness.’’

The scale of challenges facing investors is illustrated via worrying market trends such as a bear market in Chinese equities and the dire performance of eurozone banks in recent months. Mr Watling says a key story in China is the recent weakening of consumer spending as credit growth slows.

Yields on Italian bonds remain elevated and that will not change as the European Central Bank looks to end its bond buying this year. Longer term, a weakening eurozone economy will hardly calm investor nerves over Italy’s relationship with the euro. 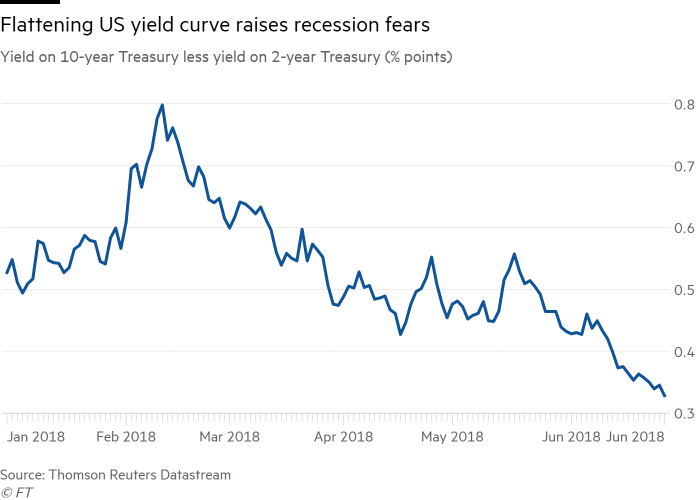 Worries over tighter regulation for US tech titans have been kicked firmly into touch by the cash-generating prowess and growth potential of the ‘Faangs’ as investors reckon that makes them immune to higher interest rates and also able to absorb any supply chain disruptions from trade protectionism.

Clearly feeling the burn from hotter trade rhetoric are US industrials. In the past month, Caterpillar, Deere & Co, General Dynamics and Boeing have been the weakest shares in a sector that is firmly negative for the year.

Betting on growth via tech or small-cap companies also dovetails with the dour message we glean from the US bond market.

For all the positive upgrades in US economic growth and inflation worries from rising oil prices, the 10-year Treasury yield has failed to sustain any rise above 3 per cent. Buyers of long-dated bonds reckon that while Jay Powell’s Fed may push overnight borrowing rates towards that 3 per cent within the next year, something in the global financial system will break before then.

The 10-year Treasury yield at about 2.83 per cent sits a little more than 30 basis points above that of the two-year note. A negative relationship or inversion between these benchmarks has been a reliable past indicator that a recession beckons. No matter the prospect of less red tape and the ability to return more money to shareholders, US bank shares are down more than 10 per cent from the sector’s post-financial crisis peak in January as the Treasury yield curve has relentlessly flattened.

Investors can ill-afford to dismiss the current febrile market mood and the interplay with the broader macro activity.