Chris Watling - the fear factors to watch in 2018

Two red flags for the markets are the Shiller PE and the unprecedented level of margin debt.  The Shiller PE, a cyclically adjusted price-to-earnings ratio popularized by Yale professor Robert Shiller, is at a level only seen twice before – at the 1929 peak before the Wall Street crash and the dot com bubble of late 1999. 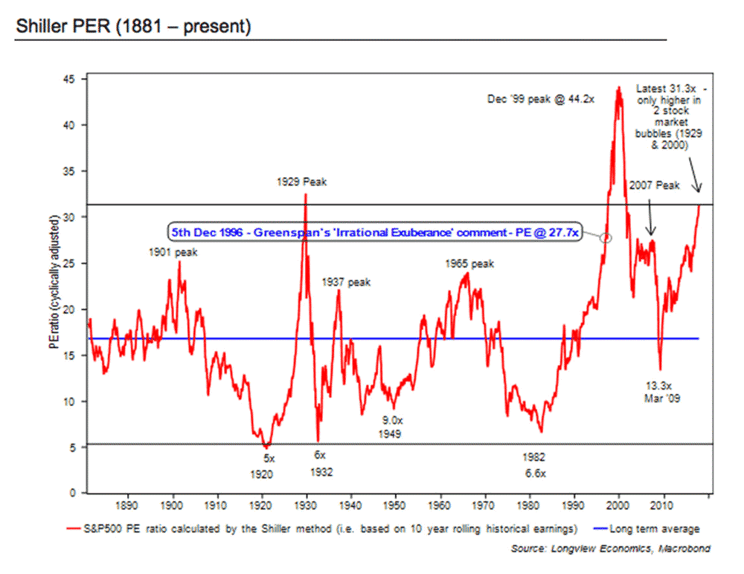 Timing is key to investing and Watling tells IGTV’s Jeremy Naylor that the Shiller PE and margin debt flags do not help with that. Better to keep an eye on three factors – tight money, a US recession and potential market shocks.

The US Federal Reserve has already begun to tighten its balance sheet, and by 2019 it’s expected that all the world’s major central banks will be tightening monetary policy and running down their own balance sheets.

HSBC, in its outlook for 2018, put central banks behind a few of its potential red flags – from the US Federal Reserve tightening driving a dollar bull run, through a potential bursting of the property bubble discouraging further rate rises, to a shock ECB (European Central Bank) rate rise. Other potential risks to the markets include protectionism and a no-deal Brexit.

In terms of where to invest, Watling suggests equities, particularly western equities ahead of emerging markets because of a strengthening dollar and concerns over the stalling of credit creation in China.

Are the FANGs (Facebook, Apple, Netflix, Google) too expensive? He also looks at whether to plump for growth or value stocks as money gets more expensive.