Why are Covid Infections Rising in Europe?

The latest Covid infection wave in Europe continued to worsen over the past week. Austria has been the first country to impose a fourth nationwide lockdown and is looking to introduce a compulsory vaccine mandate. Other countries have followed suit...

German officials haven’t ruled out another lockdown: The German health minister has warned that by the end of winter “pretty much everyone in Germany will be vaccinated, recovered or dead" (Jens Spahn, 22nd Nov).

The reintroduction of lockdown measures has sparked a strong reaction. Peaceful demonstrations involving thousands of protestors were seen in Austria, Italy, Switzerland, Denmark, Croatia, and France. In Belgium, tens of thousands marched in Brussels with protests descending into rioting. Likewise, violent clashes in the Netherlands left several people reportedly shot after the police fired into the crowd. 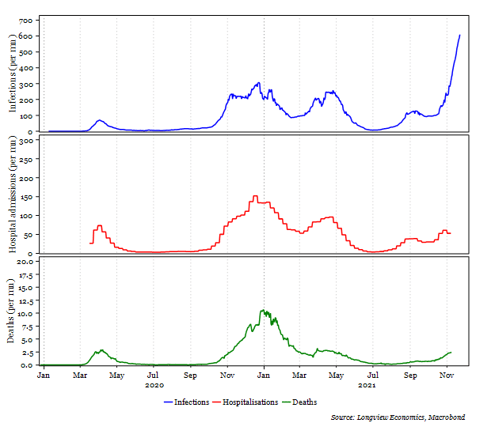 With the crisis deepening, globally investors are increasingly focussed on the health situation in Europe. In particular, the key question is whether the fast-rising infection, hospitalisation and death rates will spread across Europe, or whether they will remain contained.

In our view, there are several major factors that are likely to be driving this recent surge in infections: 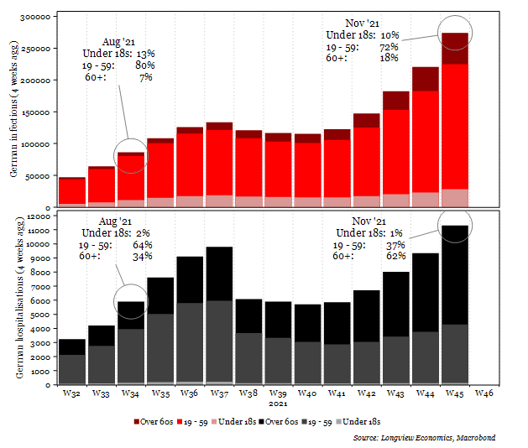 * For comparison, under 18s consistently make up just 1% – 2% of new hospitalisations.

Significantly, though, and as we highlight below, while unvaccinated patients account for a decreasing proportion of overall infections and hospitalisations, the number of infections/hospitalisations among the unvaccinated is still increasing in Germany (as well as in Denmark and the Netherlands, see last week’s piece HERE for detail). 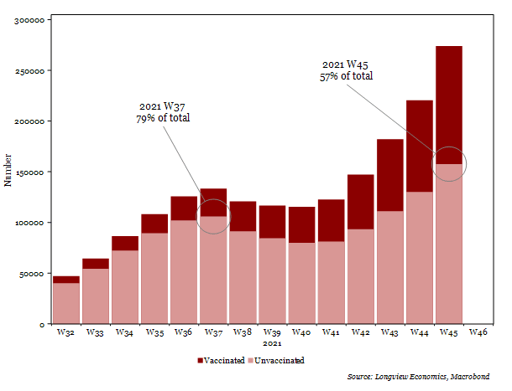 Indeed, that seems to be the case for Israel and the UK. After Israel’s rapid vaccination program in August and September, infections and hospitalisations have returned to low levels (albeit seasonal effects could also have been a factor, see point 4 below). Likewise, in the UK (where 23% of the population has been boosted), infections have yet to reach their previous peak (unlike many other European countries in which infections are making all-time highs, see fig 1h). 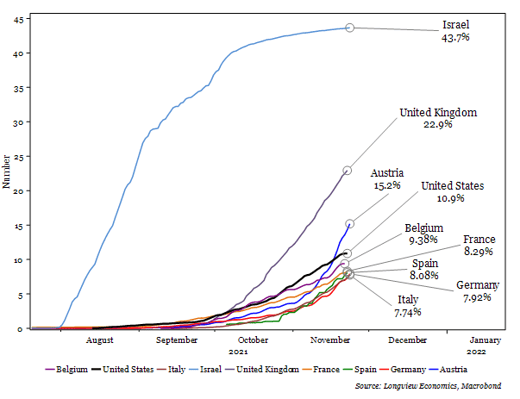 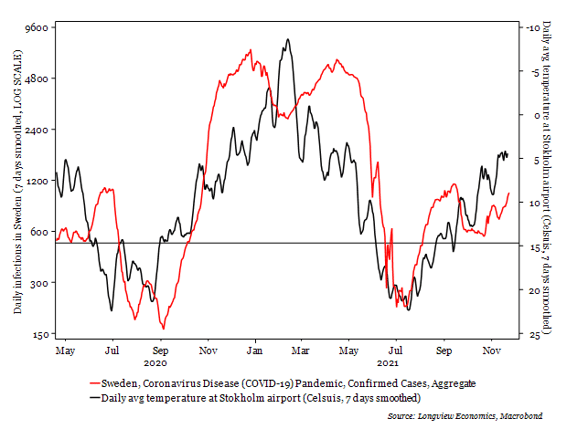 Changes in temperature don’t always coincide with rising/falling infections. In the UK for example, daily infections fell to very low levels in Feb 2021 despite consistently low temperatures and spiked in July despite generally higher temperatures (likely due to variations in lockdown measures, testing rates, etc.). Overall, though, a consistent pattern can be seen in most other major European countries. Infections in Germany, the Netherlands, and Belgium (among others) all turned higher as temperatures begin falling (e.g. see figs 1k – 1n below).

As such, it’s clear that numerous factors can influence the rate of infections over time, and that even predictable factors (such as the climate) remain a concern. With that, as infections turn higher across Europe, it’s likely that hospitalisations and deaths will follow given fading vaccine immunity, slow booster rollouts and colder temperatures. Currently, even though infections have reached new highs in several European countries (fig 1h), deaths and hospitalisations remain much lower than previous peaks due to vaccine protection (e.g. see figs 1e – 1g below). It appears, though, that without a rapid ramp up in boosters, infections, hospitalisations, and deaths will continue to rise, and stricter lockdown mandates will be further implemented across Europe in the lead up to the holidays. 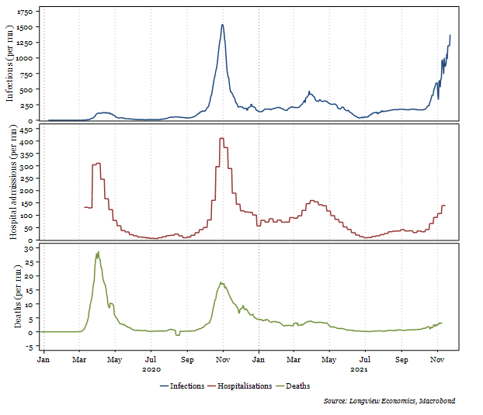 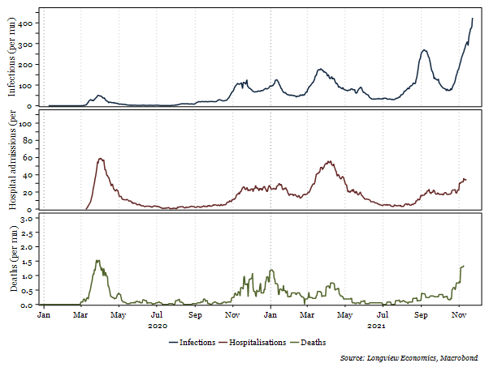 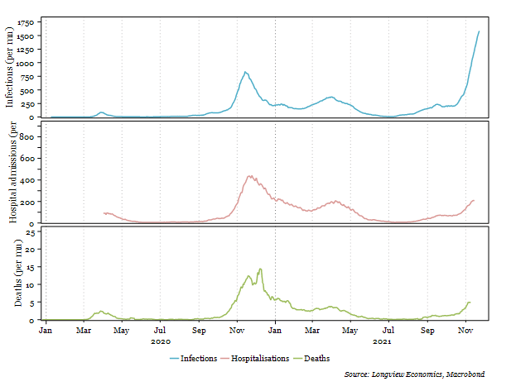 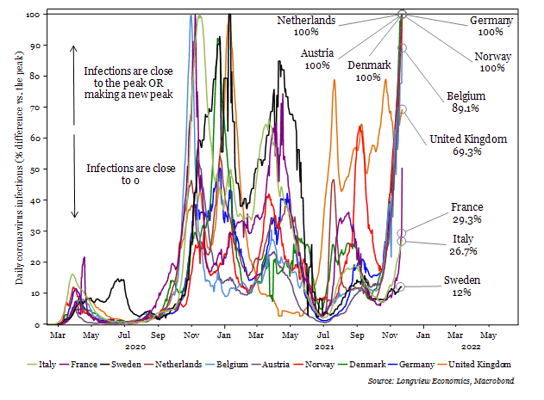 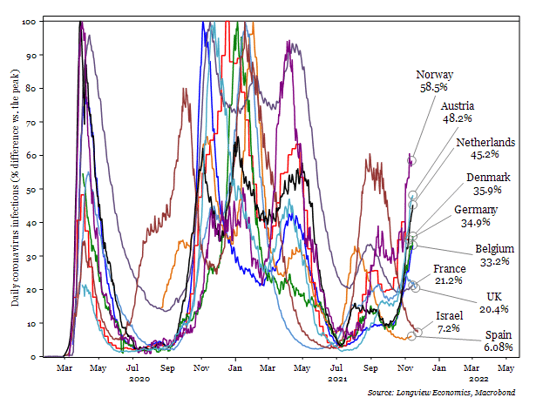 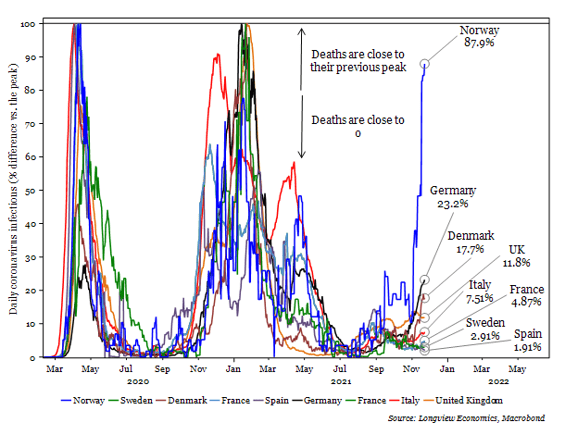 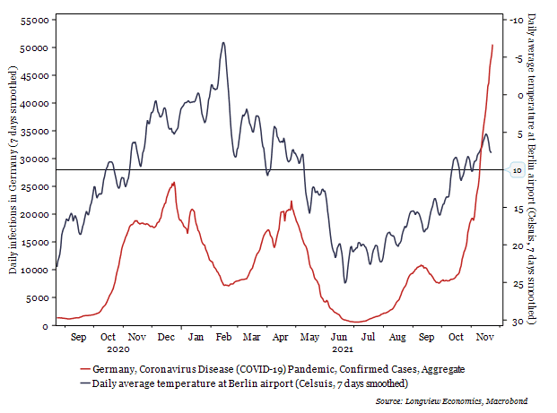 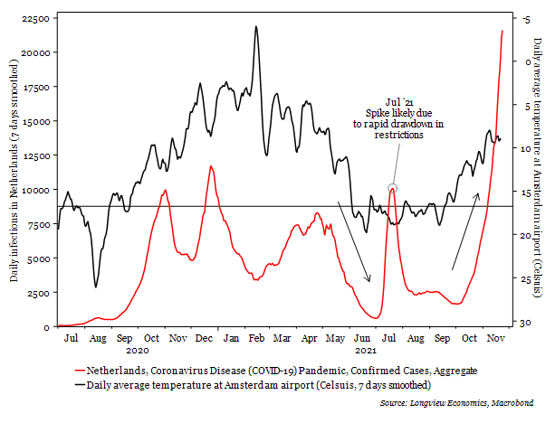 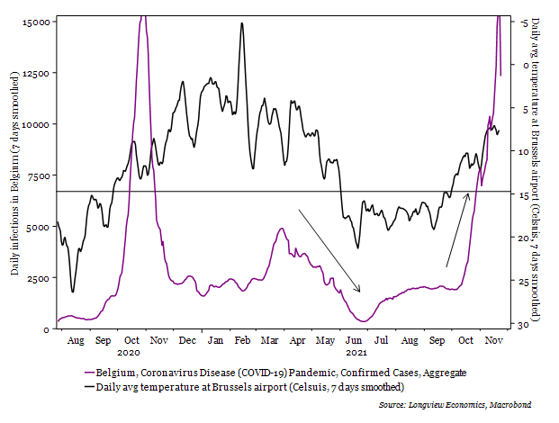 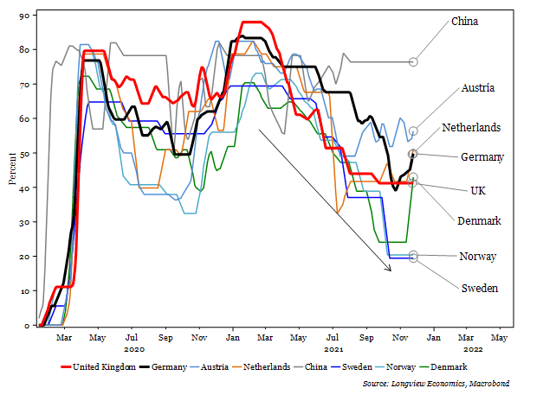 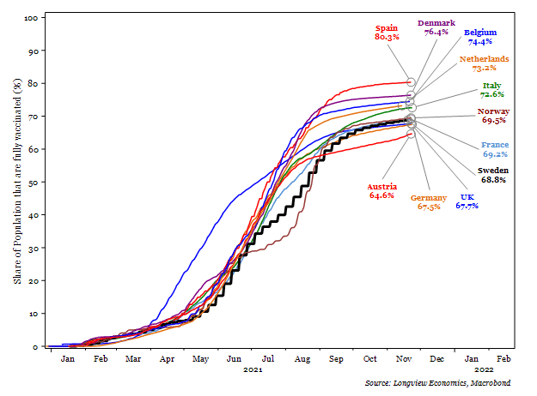 * Includes populations of all age groups. 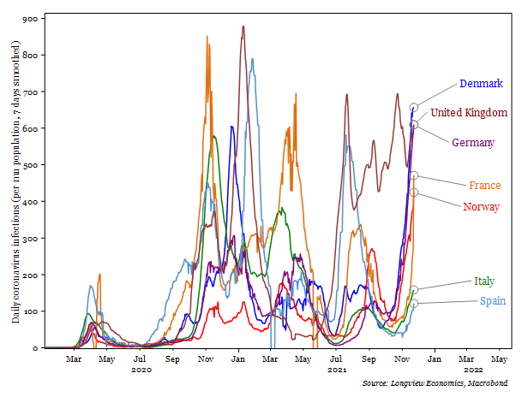 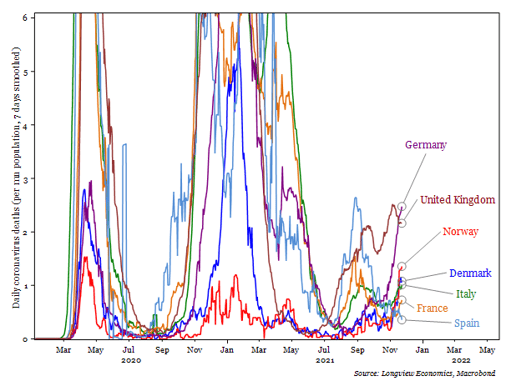