“…Whilst the Trump team’s diagnosis of the driver of the current account deficit is wrong, his (i.e. Trump’s) actions viewed through the lens of the history appear more logical. Indeed if the models of the rise and fall of Great Powers laid out by Paul Kennedy, Charles Kindleberger and more recently, by Professor Graham Allison with his Thucydides Trap(3) theory, are correct, then Trump’s actions make considerable sense.……….”

“The history of the rise and later fall of the leading countries in the Great Power system since the advance of western Europe in the sixteenth century…shows a very significant correlation over the longer term between productive and revenue raising capacities on the one hand (ED: i.e. economic strength) and military strength on the other”

“Changes of this kind in economic leverage inevitably have political repercussions, making present membership of groups like the UN Security Council, or the G8 summiteers obsolete. They will also reduce the capacity of the US to play a hegemonial role.”

“One of Bannon’s final acts before leaving the administration was to announce in an interview that to him, “the economic war with China is everything.” He argued the United States must marshal all elements of national power to confront China in various spheres or yield world hegemony.”

“This sense (ED: i.e. that the dollar’s status as the world’s reserve currency is slowly being undermined) is reinforced not only by anecdotes, Chinese government official statements and other policy announcements but also by the 7 conditions(1) for the decline (whether relative or absolute) of the world’s leading economic power that Kindleberger laid out in his seminal work “World Economic Primacy 1500-1990”. Those are as follows:

4 Financialisation of Economy – deterioration of manufacturing base

(1)NB these seven conditions are inferred by Longview Economics from a reading of Kindleberger’s work: “World Economic Primacy 1500-1990”.

Is there any logic to Trump’s actions and, in particular, his recent moves to escalate a trade war with a number of countries across the globe, most importantly with China? Will this address the US’s trade deficit? Are tariffs the cure to the US’s economic imbalances? As we have argued several times in various pieces (e.g. see Longview Letter no 108, March 2017: “Trump, the International Monetary System & the Risk of Global Deflationary Shocks”), one of the main reasons, if not the key reason, for America’s trade deficit is its overconsumption, fuelled by its appetite for debt and the way its financial system is set up to create money and generate leverage in the economy. That coupled with an unanchored international monetary system, that’s $ based (& aided and abetted by BASEL regulations and central bank consumer price inflation targeting) has generated a financial system with an unparalleled ability to create debt(2). This ‘debt system’ has generated demand, over and above supply – hence the trade and current account deficits.

In other words, the deficits are not principally a supply side issue but are driven by excessive demand, and, as such, the solution is not an attack on the supply side via tariffs but to address that overconsumption and the US’s savings rate. Once that savings rate is raised to the country’s investment rate, then the deficit (by identity) will disappear.

So, on what grounds is there any logic to Trump’s tariff wars?

Trump: The Historical Logic Behind his Approach

Whilst the diagnosis of the driver of the deficit might be wrong, his actions viewed through the lens of the history appear more logical. Indeed if the models of the rise and fall of Great Powers laid out by Paul Kennedy, Charles Kindleberger and more recently, by Professor Graham Allison with his Thucydides Trap(3) theory, are correct, then Trump’s actions make considerable sense.

Kennedy’s model, for instance, is that relative economic might is essential to retain world hegemony, i.e. the two factors go hand in hand. In the introduction to his 1988 book, he summarises that as follows:

“the triumph of any one Great Power in this period (i.e. from 1500 – 2000), or the collapse of another, has usually been the consequence of lengthy fighting by its armed forces; but it has also been the consequence of the more or less efficient utilization of the state’s productive economic resources in wartime, and, further in the background, of the way in which that state’s economy had been rising or falling, relative to the other leading nations, in the decades preceding the actual conflict”

In other words, it’s the relative economic position that matters (not absolute). That is neatly illustrated by the US’s defence spending which is 3 - 4 times more than China’s current spending. That spending allows it to maintain control over the shipping lanes and key oceans (and contain China within the First and Second Island chains – see Longview Letter no 106, January 2017: “When a Rising Power Challenges the Incumbent” for further analysis). This position, though, is arguably being increasingly challenged by an innovative China, bringing new approaches to warfare, e.g. cyber warfare, and by consistent double-digit growth in defence spending.

Professor Allison, in his book drawing upon centuries of history, analyses when rising powers have challenged established powers. In the book, he lays out the high likelihood of war between an established power and a fast-rising rival:

"(Allison) identifies 16 historical case studies in which an established power like Sparta (or the United States) was confronted with a fast-rising rival like Athens (or China). Twelve of those cases led to war. Four were resolved peacefully”

Third Kindleberger offers the final piece of the historical roadmap, laying out the 7 conditions which bring about the relative economic decline of the leading economic power of the time (NB these conditions are our interpretation and summation of Kindleberger’s thesis from our 2009 research(1)). Those 7 conditions are listed above in table 1 and include: overindebtedness, financialisaton (& deterioration of the manufacturing base), loss of technological leadership, currency debasement and so on.

Indeed Peter Navarro’s thesis about the US-China trade relationship (as laid out in his book: “Death by China”) discusses the Chinese theft of America’s intellectual property, and the abuse of the agreed global trading rules, (purportedly) policed by the WTO. Interestingly, while Navarro is often dismissed in many circles as not understanding what drives the US trade deficit (a point with which we would concur – see our view on the trade deficit above), there are many backers across party and country lines who would agree with his point on intellectual property theft. Bill Gates and Linda Jacobsen, for example, highly respected Australian academics and China watchers, argue in their recent 2017 book:

“The ability to gather information and deliver a debilitating attack on another country has already become an important element of hard power in the twenty-first century. In pursuing these capabilities, China (not only) gathers useful economic and military secrets…..….according to US intelligence sources, Chinese cyber attacks against US government institutions and companies are unprecedented………Chinese hackers have accessed important technical data on US military systems and defense technologies such as the engines used for the F-35 multirole fighter”

While Jamie Dimon, JP Morgan’s CEO, is similarly in agreement, acknowledging, earlier this month, the Administration’s point on this issue:

“Had trade been fair with China?” Dimon asked rhetorically at a town hall event in Washington, D.C. with Yahoo Finance’s editor-in-chief, Andy Serwer. With the assumption that the answer was “no,” Dimon went on to say, “The president pointed this out, and I hate to tell you, he’s right. We all know that. The Chinese know it. They steal intellectual property. There’s cybersecurity. There are very high tariffs for certain things.”

Indeed the loss of US (and western) market share in the global export market (FIG 1) is testament to the rising relative economic strength of China, and relative diminishing strength of the US (& most of the rest of the West). 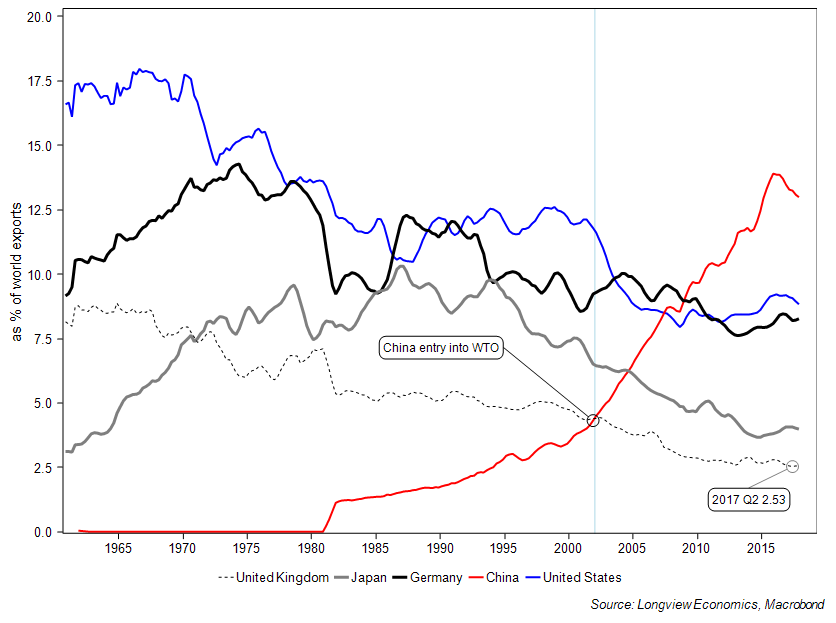 In part that loss of share relates to the competitive cost disadvantage of the US (i.e. more expensive labour costs). Over the long term, though, those relative cost disadvantages should be evened out by the movement in the currency. Hence Navarro and Trump’s contention that China is a currency manipulator (albeit we would argue that, at this present time, the RMB is most probably overvalued, having been previously undervalued for a long period of time).

In other ways, though, Trump, Navarro and other members of the administration, would argue that some of the loss of share relates to intellectual property theft and the absence/slowness of the Chinese to open their domestic markets and create a level playing field.

It’s in this context, therefore, that Trump’s actions are rooted in the logic of history. By confronting China and attempting to force a level playing field in trade and stop the theft of intellectual property rights, Trump and his team are attempting, on one level(5), to arrest America’s relative economic decline and reverse numbers 4 and 7 of Kindelberger’s conditions and with that potentially reverse the financialisation, overindebtedness and ultimately currency debasement in the US economy(6). If successful, they should delay (or potentially permanently forestall) the dilemma that Allison lays out in his book: That is forestall the ‘Thucydides Trap’ by which a rising power challenges the incumbent global power – and with that forestall the risk of the next major global war.

(2)Which happens to be replicated by most other Anglo-Saxon economies, as well as a handful of others, including China.

(3) Allison coined the phrase "Thucydides Trap" to refer to when a rising power causes fear in an established power which escalates toward war. Thucydides wrote: "What made war inevitable was the growth of Athenian power and the fear which this caused in Sparta." Source: Wikipedia

(4)The Politico article referenced above discusses the interest in Allison’s theory from within the White House by current and recent past members of Trump’s team (including defence secretary James Mattis, and former National Security adviser McMaster). The books of Trump’s trade adviser, Peter Navarro, are well known and outspoken with respect to how the US should deal with China. As Wikipedia puts it:

“Death by China: Confronting the Dragon – A Global Call to Action is a 2011 non-fiction book by economics professor Peter Navarro and Greg Autry that chronicles "from currency manipulation and abusive trade policies, to deadly consumer products," the alleged threats to America's economic dominance in the 21st century posed by China's Communist Party.”

(5 ) Clearly on another level these policies towards China also appeal to Trump’s grass roots political base.

(6) In the sense that if the US earns more income through a growing world export share, its need to generate the mirage of income growth (through financialisation and leverage) will be diminished. It’s also worth mentioning that China, itself, has recently experienced a credit boom/period of financialisation and at this stage it’s not clear how this will be resolved without impacting its long term economic trajectory (more specifically there’s a reasonably high risk of a credit bust in coming years. If that occurred, it would set China’s economic progress back considerably relative to the US).