Please find below an extract from our latest COVID-19 Update publication. The full piece can be found HERE. For any research enquiries, please contact us at info@longvieweconomics.com.

With the Russia-Ukraine situation dominating the headlines in recent weeks, Covid stories have somewhat faded into the background. Indeed, Google searches for “Covid” have fallen 75% since December and are at their lowest since the pandemic started (fig 1e). That’s despite a number of Asian countries experiencing their largest wave of new covid cases. New cases in Asia, in aggregate, are up by more than 500% since the end of last year (to a new all-time high, fig 1). Covid deaths have approximately doubled but remain significantly below their peaks from May and August last year. 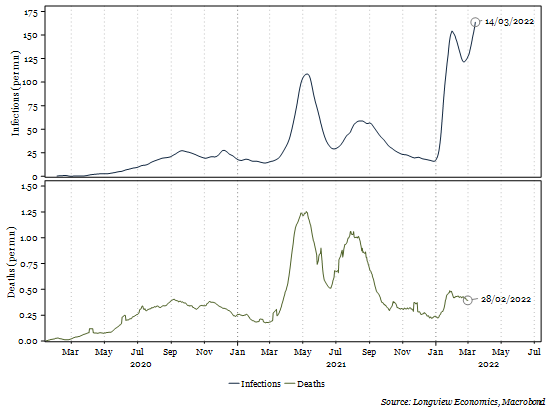 With news of new major lockdowns in China over the weekend, however, fears over the effect on global supply chains have re-emerged – particularly given a backdrop of high inflation readings around the globe. In this report we provide an update of the situation in China, as well as the rest of the key Asian economies.

Today (Tuesday 15th March), the Chinese National Health Commission announced 5,280 new Covid cases in China (including asymptomatic cases). Jilin province, in Northeast China, has the largest outbreak – with more than 3,000 cases (see fig 1d for a map of covid outbreaks by province). While these numbers are small relative to other countries (in both absolute and population-adjusted terms, fig 1a), they are much higher than any of China’s previous ‘covid waves’. Of note, nearly all provinces have had an outbreak in the past 30 days, including the major cities of Shanghai, Beijing, Chongqing, and Shenzhen (albeit, as of yet, no new deaths have been reported in China).

Despite talk of China moving towards ending their zero-Covid policy (as we discussed in our Covid Update 2nd Feb: “Excess Deaths close to Zero?”), the Chinese government response to these outbreaks has been marked. The more than 14 million residents of Jilin are unable to leave the province or move between cities. In the provincial capital Changchun, residents have been locked down since last Friday, until mass testing can be completed.

More importantly, from a global manufacturing perspective, the Guangdong city of Shenzhen, with a population of 17 million, is under a seven-day lockdown (from 14th March). In particular, no residents are allowed to leave their apartment complex except to do three rounds of Nucleic Acid Testing (NATs). Logistics company Seko has warned that while Shenzhen Port technically remains open, trucking restrictions for vehicles traveling in and out of Shenzhen remain in effect and could slow the supply chain, since no cargo from outside the restricted area can enter. Of note, Shenzhen Port is the 3rd largest port in the world, and when Yantian, its largest terminal, closed for a month in 2021, the effects on global shipping were substantial (and are arguably still ongoing). In addition, Foxconn, which manufactures iPhones, has halted operations in its Shenzhen factories.

In Shanghai, the world’s largest city, residents have been asked not to leave the city unless absolutely necessary; a negative NAT is required for use of public transport; elementary and secondary schools are closed; while large exhibitions, art performances and other gatherings have been banned.

In other words, despite falling fatality rates in China (and globally, see fig 1b) it’s covid policy remains tough and, as such, China remains a key source of potential supply chain disruption and inflationary pressure in the global economy.

A number of other Asian countries, which are not currently attempting a ‘zero-covid’ policy, have seen much larger increases in Covid cases since the start of the year. In particular, South Korea and Vietnam are in the midst of significant outbreaks. In December 2021, which was South Korea’s previous largest wave, daily cases per million peaked at 133. That number is now 5,794 (fig 1c). That’s a total of 337k cases daily (i.e. not adjusted for population), the largest anywhere in the world currently. With that, Covid deaths have risen sharply to new highs (which are nearly 3 times as high as the December peak).

The story in similar is Vietnam, which currently has the second-largest number of daily cases (256k)1. That case number is also a at new all-time high, albeit deaths remain relatively low (fig 1i).

Despite cases rising at such a significant rate, there are two key reasons for optimism:

Increasingly, therefore, the key questions in this pandemic are evolving towards: When will China, and certain other major economies, can learn to live with the ‘new normal’? And, linked to that, when will the risk to global supply chains ease? Risks, as always, are multiple and include the potential for a new strain of the virus to emerge. As hospitalisation and fatality rates keep falling, though, it’s likely that China’s tough covid policy approach will, at some stage, begin to loosen. 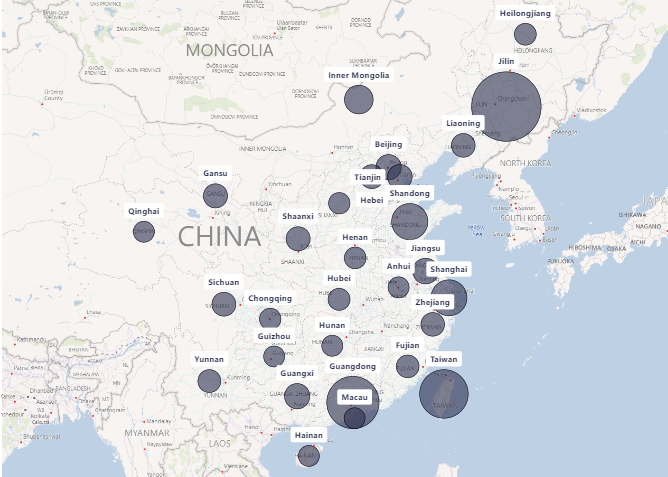 NB this chart excludes Hong Kong, whose cases are several orders of magnitude higher, and would distort the chart. 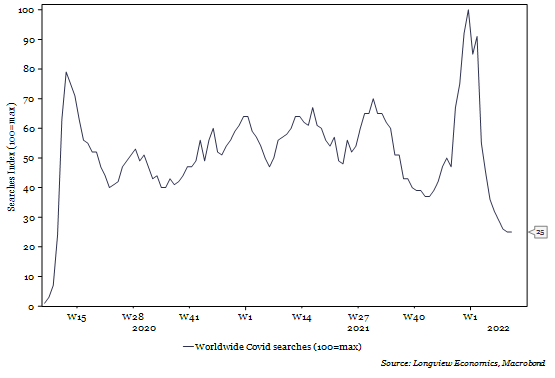